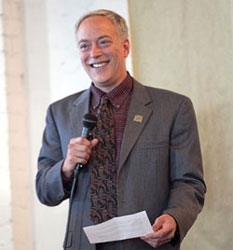 Craig has lived and worked in the Metro Detroit area for the past 32 years. Born in Canton, Ohio, Craig attended Ohio State University and achieved his Bachelor’s Degree in Communications and Political Science. Craig was on the Ferndale City Council for eleven years, twice elected to the council and twice elected as mayor.  In 2010 he was elected and served a term on the Oakland County Board of Commissioners representing Ferndale, Hazel Park, and southern Royal Oak.

His environmental and community involvement began earlier, when in 1970, as a young teen, he organized a group of young people to clean up an empty lot that was full of trash and an eyesore in the neighborhood. This was in observance of the first Earth Day. He was a writer and columnist for his school paper, winning a regional writing award in his senior year. During his college years, Craig volunteered with the National Organization for Women and other human rights groups. In 1980, he was elected as a Kennedy delegate to the Democratic National Convention in New York City. He also served three years on the Board of the American Civil Liberties Union in Columbus in the early 80’s. He was only 25 years old at the time. He founded Ohio’s largest Gay rights organization, Stonewall, in 1981.

He moved to Michigan in 1985 to direct the Michigan Organization for Human Rights. In 1987 he began working full time in public health in the area of HIV/AIDS education and prevention for both state government and not-for-profit agencies.  He founded many community charitable organizations and events over the past three decades. He worked for Oakland County’s Water Resources Commissioner for four and half years as the Community Liaison.  In 2013, he helped found Pure Oakland Water